Brain Injuries On and Off the Football Field 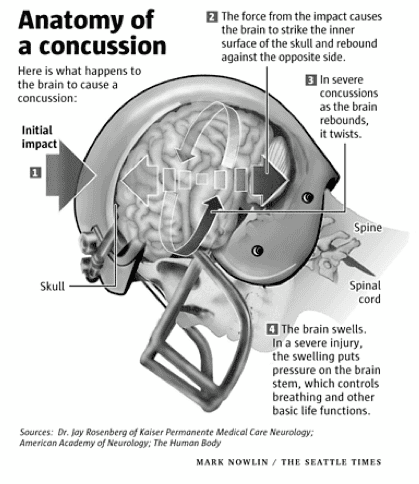 Football season is on the horizon along with the excitement of customizing your fantasy team, Monday nights, and the thrill of the game. Unfortunately, a concussion crisis in the National Football League (NFL) is overshadowing this favorite American pastime. So, while you may have football on your mind, it’s important to understand injuries to the brain and secondary neurological problems.

Brain injuries are a serious matter on and off the field. The types of brain damage that can occur as a result of being a football player have received increased attention in recent years. For example, there is a growing awareness of a progressive degenerative brain disease called chronic traumatic encephalopathy (CTE). CTE affects the brain of people who have suffered repeated concussions and traumatic brain injuries (TBI), such as athletes who partake in contact sports, members of the military and others (protectthebrain.org).

The severity of injury/physical trauma on brain function ranges from “mild”, “moderate” and “severe.” This categorization is misleading since it does not specify the severity of consequences from the injury.

A concussion is considered a “mild” TBI (MTBI) caused by a blow to or violent shaking of the head, either with or without loss of consciousness and can lead to temporary cognitive symptoms. Concussion signs and symptoms include headache, nausea, vomiting, fatigue, confusion or memory problems, lack of coordination, sleep disturbances, or mood changes.

Moderate to severe TBI can cause bruising, torn tissues, bleeding and other permanent physical damage resulting in long-term complications or death. Symptoms include:

According to the Centers for Disease Control and Prevention (CDC), “A severe brain injury can affect all aspects of people’s lives, including relationships with family and friends, as well as their ability to work or be employed, do household chores, drive, and/or do other normal daily activities.”

If you suspect a brain injury, seek medical attention immediately or call 911 right away.

The experienced traumatic brain injury lawyers of Kershaw, Cook & Talley have helped thousands of individuals with serious injuries. If you sustained a traumatic brain injury caused by someone else’s negligence, you are potentially entitled to compensation. Call us for a free case consultation at (916) 520-6639.