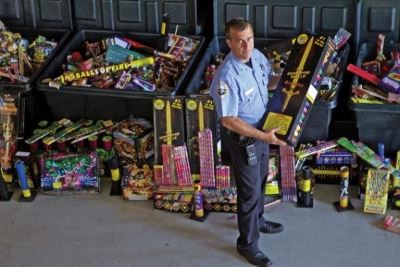 Independence Day festivities involving fireworks escalated too far this weekend according to the NY Daily News, as police officers and civilians suffered hospitalizations and serious injuries from coast to coast. Both a 31-year old Nebraska man and a 9-year old girl in Los Angeles lost a hand due to illegal activities involving explosives, and a small girl in Compton suffered severe blast injuries to the face. Plenty of other people across the nation suffered injuries from explosions this weekend, including a man in Auburn, Washington who lost a hand while holding fireworks that exploded and two officers in Chicago who were at the receiving end of “half a stick of dynamite” tossed from a red Toyota Camry.

According to the Consumer Products Safety Commission (CPSC), during the month around July 4th, 230 people on average go to the emergency room every day with injuries caused by recreational explosives. In addition, an estimated 10,500 fireworks-related injuries were treated in US hospital emergency departments during 2014. 67% (roughly 7,000) of those injuries in 2014 took place between June 20 and July 20, illustrating the danger of overzealous Independence Day celebrations. In light of these statistics, it is important to exercise a bit of caution while enjoying Independence Day festivities.

In California, people are held liable for “ultrahazardous” activities regardless of the degree of care they exercise. However, courts have found fireworks not to be these types of “ultrahazardous” activities, and therefore liability for injuries caused by them is decided by traditional negligence principles. If one wielding fireworks breaches his or her duty of ordinary care in handling them, and such breach causes harm, the wielder is liable for the resulting injuries. Liability will be diminished in proportion to the percentage of fault attributable to the one injured. Consult an experienced attorney if you or someone you know has been injured by the negligent handling of fireworks.