A veteran attorney with well over 40 years of experience, William “Bill” A. Kershaw is the managing partner at Kershaw, Cook & Talley. His decades in practice and the results he has secured are evidence of just how much of an influence a committed attorney can have for a client, particularly in the field of personal injury law. He has focused exclusively on representing the injured and wronged since 1983.

Bill has gained a national reputation as a personal injury attorney, particularly in the following fields:

He has served as court-appointed counsel, both lead and liaison, in a number of such proceedings across the country. Bill has gone up against some of the largest corporations in the United States on behalf of the injured – and won. Time and time again, he has proven that an unwavering dedication to the pursuit of justice can yield outstanding results for those in need.

Among his notable accomplishments include a $330 million settlement against American Honda Motor Company for RICO violations involving a nationwide bribery conspiracy and a $180 million settlement against a Richmond chemical company for releasing sulfuric acid vapor in the air in the San Francisco Bay area. Bill has also been selected to the Northern California Super Lawyers list every year from 2005 to 2016 and has an AV Preeminent rating with Martindale-Hubbell, a leading peer-review service.

During his career, some of his notable cases, settlements, and verdicts include: 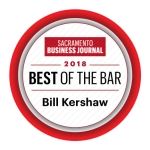