The Herbicide Glyphosate Found in Children’s Cereals and Oat Products 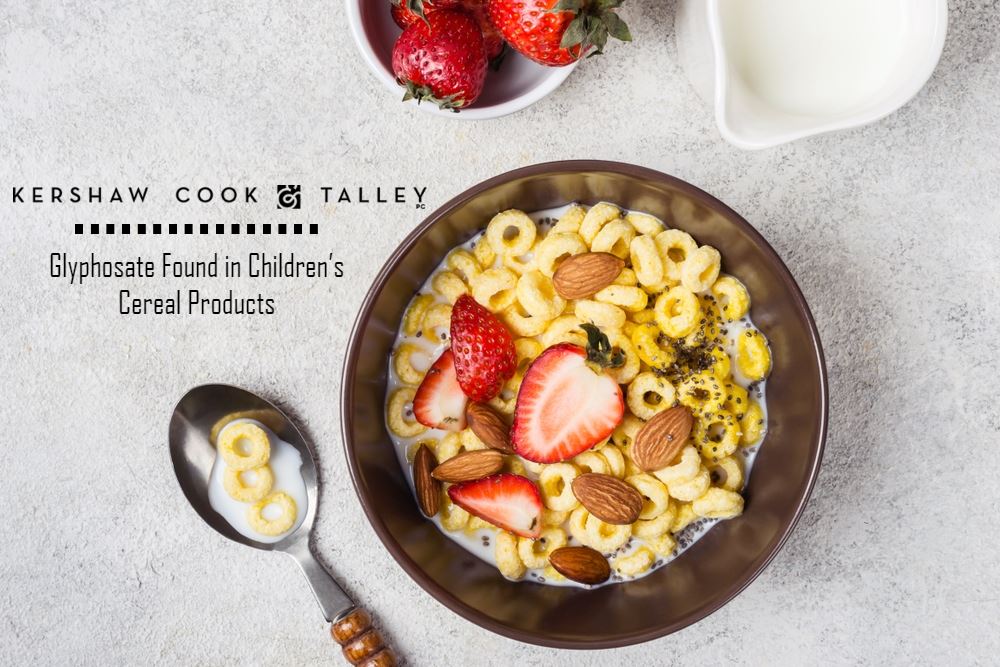 According to a recent study by the Environmental Working Group (EWG), twenty-one General Mills products have been found to contain the active ingredient used in the weed killer Roundup®. Seven varieties of Cheerios and fourteen Nature Valley products, such as Nature Valley bars, have been found to contain levels of the herbicide, glyphosate, beyond what it considers safe for children.

Last fall, the Food and Drug Administration (FDA) released long-awaited test data of glyphosate in foods. The FDA found the weed killer in 63 percent of corn samples and 67 percent of soybean samples. Yet the agency failed to include other foods in which glyphosate is likely to be found, including those made with oats and wheat.

According to EWG, glyphosate can be found in more than 95% of popular oat-based food samples tested. Along these lines, EWG found varying amounts of glyphosate in Mueller, Barilla, Harris Teeter and Signature Select pastas, in addition to those levels found in cereal products from General Mills, Quaker, and Kellogg’s.

Glyphosate is the most widely used herbicide and crop desiccant in the world. It is the active ingredient in Roundup that is used to kill weeds and grasses that compete with crops. Glyphosate was introduced in the 1960s and initially used as a pipe cleaner. However, with the advent of genetically engineered food in the 1990s, glyphosate was reintroduced as a weed killer and usage levels shot up dramatically in the 2000s.

In this time period, Monsanto introduced genetically engineered “Roundup Ready” crops, or crops genetically designed to withstand the herbicide. These crops enabled farmers to use glyphosate to kill weeds without killing their crops. As a result, farmers quickly adopted glyphosate for agricultural weed control. Now an increasing amount of crops have been genetically engineered to be tolerant of glyphosate. Almost 90% of corn, canola and soy are genetically modified to be “Roundup Ready.” Consequently, if you consume any products from major brands like General Mills, Kellogg’s, or Quaker, you are likely exposing yourself to glyphosate.

Can Glyphosate Cause Cancer?

In 2015, both the state of California and the World Health Organization declared glyphosate a “probable carcinogen” or probable cause of cancer. Oncologists, those that specialize in cancer prevention, detection and treatment, believe glyphosate can kill healthy bacteria in the gastrointestinal tract, disrupt the endocrine system, and may increase the risk of lymphoma. Additionally, interacting with glyphosate may affect hormones and cells. However, the effects of glyphosate and disease detection may take ten to twenty years to become evident. Where glyphosate usage levels shot up in the 2000s, scientific evidence today continues to link glyphosate with cancer, notably to non-Hodgkin lymphoma.

How Does It Get In Our Foods?

Modern, competitive farming methods incorporate wide-spread use of glyphosate. According to the National Agricultural Statistics Service, in 2017, approximately 12.4 million pounds of glyphosate were applied to various varieties of wheat grown in the U.S. Most glyphosate is sprayed on “Roundup ready” corn and soybeans genetically engineered to withstand the herbicide.

Increasingly, glyphosate is sprayed on crops just before harvest, including wheat, barley, oats and beans that are not genetically engineered. Glyphosate kills the crop, drying it out so it can be harvested sooner than if the plant were allowed to die naturally. Once the crop dries out, the crop is processed and included in our foods. This expedited harvest process leaves those farmers who don’t use glyphosate at a competitive disadvantage. Thus, the use of glyphosate has become commonplace in a competitive market.

Even those farmers who don’t use glyphosate or have committed their crop as organic may have detectable glyphosate levels in their crop. This occurs where farmers upstream contaminate water with the herbicide or where the soil was previously exposed to glyphosate, even if the exposure occurred many years ago. Glyphosate use has become so prevalent in farming and food products that today, traces of the herbicide can be found in the urine of most people in the country.

If Glyphosate Is That Common & Is It Really Unsafe?

While the state of California, World Health Organization, Environmental Working Group, Public Interest Research Group, and other advocacy groups believe glyphosate is linked to cancer, the Environmental Protection Agency (EPA) finds the occurrence of glyphosate in foods, drinking water, and consumer products to be nominal and the link to be unlikely. Where EWG’s safety threshold for glyphosate in grains and cereals, measured in part per billion, is 160 ppb, the EPA’s threshold is significantly higher at 30,000 ppb. It should be noted that the EPA set its legal limit for glyphosate on oats in 2008, well before the cancer findings of the International Agency for Research on Cancer and California state scientists. EWG proposes its threshold of 160ppb with the risks of lifetime exposure in mind, reasoning that small, repeated exposure can add up if someone eats food containing glyphosate every day.

EWG believes chemicals linked to cancer do not belong in food, especially children’s food. With the prevalence of glyphosate in farming practices, the aggregate amount of glyphosate consumed via a varied supply of food sources may be hazardous to consumers’ health. EWG and similar groups propose the risks of lifetime exposure should be sharply limited.

A number of companies have banded together to urge the EPA to limit glyphosate use:

The proposal from these companies will hopefully embolden the modern movement to develop more sustainable, glyphosate-free farming practices.

Roundup has been linked to several types of cancer including brain cancer, breast cancer, prostate cancer, lung cancer, and blood cancer. Many of the lawsuits against Bayer AG and Monsanto for using glyphosate in Roundup® weed killer – there are currently more than 11,000 of these lawsuits pending – claim repeated exposure to the chemical can cause Non-Hodgkin’s lymphoma (NHL) in particular. NHL is a blood cancer that targets the lymphatic system, proving fatal in many cases.

People who have been exposed to glyphosate often complain of irritate eyes, itchy skin, chronic nausea, dizzy spells, sore throat or painful swallowing, breathing difficulties, migraines, nose bleeds, and a general lack of energy. Have you or a loved one experienced any of these symptoms recently? Roundup® weed killer could be to blame.

We Never Give Up the Fight for Justice

At Kershaw Cook & Talley, we are currently hearing from people across the country who have been exposed to high glyphosate levels unknowingly. We are dedicated to taking on Monsanto and Bayer on behalf of people who used Roundup® weed killer and consequently developed a form of non-Hodgkin’s lymphoma. Now, following the EWG’s report, we are asking others to reach out to us if they have maintained an oat-based diet and now have NHL symptoms or an NHL diagnosis. It is possible that glyphosate in common cereals, oats, and other foods could have contributed to your cancer’s development across the years.

It is our mission to make certain large corporations do not get away with negligent business practices that expose innocent consumers to danger. It is our passion to stand up for those who have been wronged, fighting tirelessly to achieve for them fair compensation, justice, and a sense of closure.