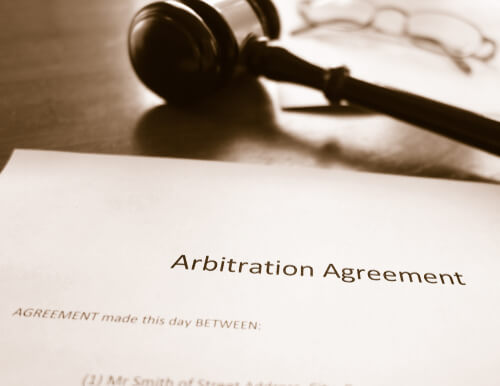 In February of this year, Democrat lawmakers in Congress introduced a bill entitled the Forced Arbitration Injustice Repeal (FAIR) Act to bar mandatory arbitration agreements. The FAIR Act was initiated in both houses, in the Senate by Sen. Richard Blumenthal (D-Conn), and in the House of Representatives by Rep. Hank Johnson (D-Ga). At a press conference for the FAIR Act, Sen. Blumenthal denounced forced arbitration as “one of the systems that is truly rigged against consumers and workers,” and as “unfair, unjust and un-American.”

Mandatory arbitration clauses have become a regular provision in employment, consumer, and business contracts.  In 2017, 56% of private-sector, nonunion workers — approximately 60 million employees —were subjected to mandatory arbitration agreements. While arbitration clauses may differ in their mechanics, most require individuals to surrender their right to trial in a public court as well as their ability to form class actions. Instead, plaintiffs are compelled to dispute resolution via individual, and often confidential, arbitration.

What Does the Process of Forced Arbitration Look Like?

Many of those affected by arbitration clauses raise questions of arbitrator bias and condemn the process as “one-sided.” To illustrate, within the employment context, arbitration is presided over by an arbitrator hired by the employer and often held in a setting of the employer’s choice. The arbitrator is paid by the employer and generally seeks to maintain a working relationship with the employer. Moreover, while arbitration is not inherently private, many employers include confidentiality provisions in their agreements with plaintiffs that bar them from publicly speaking about the arbitration. This legal arrangement provides employers with massive leverage in the proceeding. As a result, plaintiffs are less likely to win in private arbitration and if they do, they tend to receive much less in relief than they would in a public court.

With the rise of the #MeToo movement, women advocates have argued that forced arbitration allows employers to sweep harassment accusations under the rug by forcing plaintiffs to bring their claims privately. Where victims are precluded from bringing class-actions or even class-arbitration, they may also be less inclined to bring claims alone. In addition, attorneys may not find these individual claims to be economical, leaving victims hard-pressed to find representation. The same goes for plaintiffs with consumer, antitrust, and civil rights claims. Such clauses may become imposed upon and enforced against company shareholders as well.

With the FAIR Act, Democrat lawmakers seek to bar these mandatory arbitration agreements. While some say bills of this nature have appeared over the years and failed, there is new ground swell in support of the FAIR Act. Proponents of the bill cite recent polls conveying public support for curbing arbitration agreements. Activists in employment, anti-discrimination, and consumer rights movements have been vocal and effective in social media campaigns. In fact, after much pressure from workers, Google announced it would end forced arbitration for all internal matters. If activists continue to pressure and affect corporate image, it is possible other businesses may follow Google’s lead.

While Democrats in Congress introduced the FAIR Act, the law seems to be gathering bi-partisan support. Several Republican senators, including Sen. Lindsey Graham (R-SC), the chair of the House Judiciary committee, are showing concern and seem willing to work with Democrats to fix the forced arbitration system. Sen. Graham has stated on the subject: “I want to be pro-business, but everything that’s good for business may not be the best answer for society.” Sen. Graham has since scheduled committee hearings to discuss the benefits and drawbacks of forced arbitration, as well as to develop solutions to the problem.

Signs from Congress on fixing the arbitration system are hopeful—this may be one of the rare issues that could lead to a bi-partisan compromise. Otherwise, it is likely the FAIR Act will have its best chance for passing in the event of an administration change in 2020.

If you have any questions about the FAIR Act, or mandatory arbitration, please contact our office online or call (916) 520-6639.