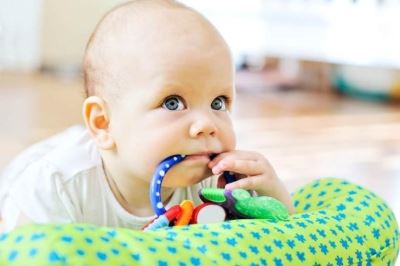 Polyvinyl chloride (PVC) is a soft vinyl plastic that often contains lead and phthalates, and the production or destruction of PVC releases cancer-causing dioxins into the environment. Products that contain PVC include flexible plastic toys (e.g., rubber duckies, dolls, beach balls, infant bath books), bibs, rest mats, inflatable swimming pools, garden hoses, raincoats, wall paneling and flooring, window blinds, cosmetics, shower curtains, crib bumpers, imitation leather, and food packaging. Health concerns associated with PVC include cancer, birth defects, reproductive and developmental disorders, low sperm count, undescended testes, premature puberty, and liver dysfunction. Despite the dangers of these chemicals, they are not required to be approved for safety before they are placed in products that can end up in children’s mouths, schools, and homes.

According to a Daily Mail article, a recent German study revealed that many armbands used to help children swim, contain cancer-causing chemicals. The article delved into a German study, where tests were conducted using an inflatable beach ball, a pair of swimming armbands and two bathing rings, all of which are made with PVC. A small piece of material from each sample was analyzed using a variety of material analysis techniques. The researchers then investigated the molecular make-up of the distinctive smells emanating from the pool toys. They extracted detectable odors from each sample using solvent extraction and high vacuum distillation methods, and then identified the main odorants using a combination of sensory and common analytical approaches. Between 32 and 46 odors were detected in each sample, of which up to thirteen were quite intense. The researchers also found many dangerous organic solvents such as Cyclohexanone, Isophorone, and Phenol. These chemicals have significant dangers: Cyclohexanone can be harmful if inhaled, Phenol has been shown to affect hormone balance and affect genes in a way that could fuel tumor growth, and Isophorone is a category two carcinogen, which means that this is a suspect substance in the development of cancer in humans. The study further revealed that children can be affected simply by smelling the arm bands’ rubbery odor. The more pungent the smell, the higher the risk. This also holds true for other strong-smelling products such as inflatable beach balls and bathing rings.

The United States Department of Health and Human Services has determined that PVC is a known carcinogen. Studies show that people who have inhaled PVC demonstrated an increased risk of liver, brain, lung cancer, and some cancers of the blood have also been observed. Children are likely more susceptible to PVC-induced cancer than adults. In addition, PVC contains a hormone disrupting chemical called phthalate, which has been linked to asthma, obesity, and lowered IQ in children. Phthalates migrate out of PVC products when they are exposed to heat and can be absorbed through one’s skin or taken in orally—such as when kids handle plastics and then put their hands in their mouths. Producing PVC pool toys also takes a toll on the environment. PVC factories release cancer-causing dioxin as a by-product, and a recent CNN documentary, reported that residents in one Louisiana town near a PVC-production facility had dioxin levels three times higher than the national average. As a result, residents were suffering from higher rates of cancer, kidney problems, and reproductive disorders.