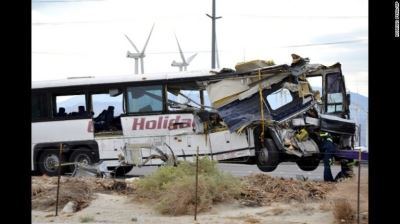 According to CNN, a tour bus smashed into the back of a tractor-trailer on October 23, killing the driver and 12 passengers and injuring dozens more. The crash occurred at 5:17 a.m., a bit over an hour after the bus left to take its passengers back to Los Angeles from the Red Earth Casino in Palm Springs.

California Highway Patrol (CHP) Border Division Chief Jim Abele reported that the bus left no skid marks before colliding with the tractor-trailer, indicating that the driver did not apply the brakes before the crash. The only marks on the road from vehicles were those left by the truck as the bus pushed it forward.

The National Transportation Safety Board (NTSB) is currently conducting an investigation regarding what caused the crash, and is looking into the driving records of both drivers, their accident histories, and their respective levels of training.

In recent years, this crash ranks among the deadliest in California.

The Federal Motor Carrier Safety Administration (FMCSA) reported 3,649 fatal crashes involving large trucks or buses in 2014 alone, with a total of 4,161 total fatalities resulting in that year. While that number is unacceptable, it has been steadily declining since 1979. That year, 6,007 crashes involving large trucks or buses occurred with 7,054 fatalities resulting.

Drivers owe a heightened duty of care due to the inherent danger in driving motor vehicles. If a driver breaches this duty, and the breach of duty causes harm, those injured can recover from the driver. Here, the fact that there were no skid marks produced by the bus indicates that the driver may have failed to pay attention and thereby may have failed to act with the level of care required by law. If this is the case, those harmed can recover from the deceased driver’s estate.

In addition, employers can be held liable for harm caused by employees who are acting within the scope of their job duties at the time of harm. Since the driver was driving for USA Holiday, an Alhambra-based driving company, those injured can likely recover from USA Holiday should a court find that the driver was acting within the scope of his job duties when he crashed into the tractor-trailer.

If you or a loved one has been injured by a driver’s negligence, please contact our office so we may assist in your recovery.