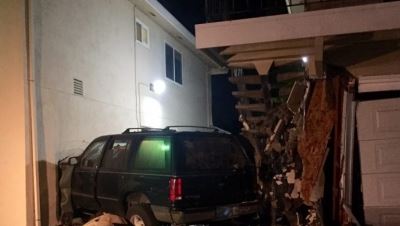 At approximately 3 AM this morning, a Ford Explorer slammed into two apartment buildings in South Sacramento. The SUV driver, a man in his 60s, claimed the accident occurred due to his foot getting stuck on the gas pedal, which caused him to lose control of the vehicle. The Sacramento Fire Department arrived to the location of the collision shortly after 3:15 AM, quickly discovering that the accident had sheared off four gas lines attached to the building. Although the fire department was able to stop the leak, the odor of natural gas could be smelled a block away from the crash site and the two apartment buildings were forced to be evacuated. The police said the driver will likely not be cited in the accident and the apartment’s manager will be handling the building’s repairs.

Although the story is still developing, Captain Simon Wiesner of the Sacramento Fire Department reports drugs are not suspected to be a factor in the accident. The CDC reports that each day in the United States, “over 8 people are killed and 1,161 injured in crashes that are reported to involve a distracted driver.” Similarly, the National Highway Traffic Safety Administration estimates that drowsy driving was the cause of at least 72,000 crashes, 44,000 injuries, and 800 deaths in 2013. Alarmingly, 1 in 25 adult drivers have fallen asleep while driving in an average 30-day period.

Most crashes or near-misses occur between 4-6 AM, midnight-2AM and 2-4 PM. November 6-13, 2016 is Drowsy Driving Prevention Week. In anticipation of daylight savings time and the darker winter months, The National Sleep Foundation offers the following tips to prevent distracted driving: