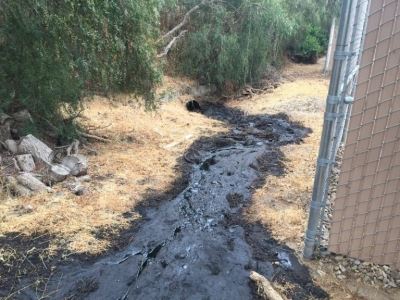 In Ventura, CA yesterday, 29,000 gallons of oil spilled from a pipeline underground. Luckily, the oil stopped in a canyon ravine a quarter-mile away from the source before reaching the ocean or beach – but it still left an unsightly black stain down the arroyo through which it flowed.

It was the 11th spill since 2006 for the operator, Crimson Pipeline, and the cause is still under investigation. Releases attributable to Crimson Pipeline in the past have totaled 313,000 gallons of crude oil, and have caused $5.9 million in property damage.

According to the Pipeline and Hazardous Materials Safety Administration (PHMSA), 594 spills of various types of hazardous liquid from pipelines occurred in 2014 alone. Such spills can cause permanent damage to humanity or wildlife in various ways. These ways include oil working itself into the fur and plumage of animals, impeding their ability to self-regulate body temperature and sometimes causing accidental ingestion of the toxic substance. Such oil can also pollute groundwater, causing a host of difficulties for both humanity and other forms of life.

Legal Significance of Oil Spills and Other Releases of Hazardous Waste

There exist various theories of liability for those responsible for oil spills. The simplest theory is negligence – if someone breaches their duty of ordinary care, resulting in an oil spill which causes injury or property damage, the breaching party is liable for the damages caused by the oil spill. Alternatively, there are federal remedies in place to help deal with the release of toxic substances into the environment. The federal Comprehensive Environmental Response, Compensation, and Liability Act (CERCLA) applies where there is any threat or substantial threat of release of toxic material into the environment. It holds liable “owners and operators” of facilities that deal with waste, transporters of waste, and those who accept the waste for transport to disposal sites. Those entities are responsible for costs incurred by the government in remedying the contamination as well as damages to natural resources resulting from the release of contaminants.

If you know of a release of hazardous substances in the environment or onto property and think someone ought to be held accountable, call an attorney experienced in handling toxic torts and environmental injuries.