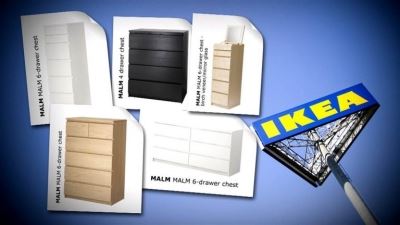 In response to the death of three toddlers, and multiple injuries, IKEA has recalled its “Malm” series of dressers. Approximately 29 million chests and dressers were recalled due to the tendency to tip over and trap kids underneath. The giant furniture conglomerate, in explaining the recall, publicly announced that they “could be a danger” to children if used within the home.

The three children killed by an IKEA Malm dresser attempted to climb up the dressers, causing fatal injury when the dressers tipped over and fell.

According to the Consumer Product Safety Commission (CPSC), unsecured TVs and large pieces of furniture cause the death of a child once every two weeks. The Commission further reported that 38,000 Americans go to the emergency room every year for injuries caused by the tipping over of TVs or top-heavy furniture. A 2015 report by the CPSC found that, if tipped over from an average sized dresser, a TV falls with thousands of pounds of force. These statistics prompted an “Anchor it!” campaign from the CPSC, urging homeowners, parents, and caregivers to secure their furniture to the walls.

There exist two different tests in California for determining whether a defendant can be held liable for a design defect. The first is the “risk benefit test” under which a plaintiff must prove the following before liability may be imposed:

Once these three facts are proved, then the plaintiff must prevail unless the defendant shows that the benefits of the design outweigh its risks.

The second test is the “consumer expectations test” under which liability can be imposed if plaintiff shows the following:

These two tests are alternatives and a defendant can be held liable if either test is satisfied. Failure to satisfy one test cannot be used as a defense, should the defendant satisfy the other one.

If you believe an entity is manufacturing, distributing, or selling products with a design defect, and thereby causing harm in California or elsewhere, call a design defect attorney in your area to help keep consumers and their loved ones safe.