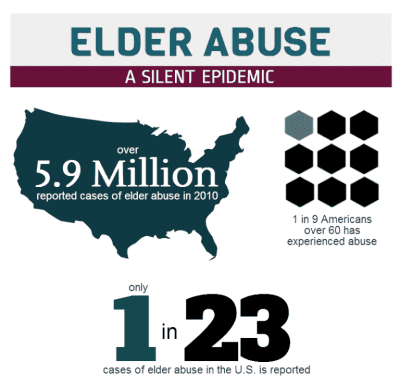 Our culture is well-aware of the prevalence of child abuse, and citizens rightfully spring to action to shame and weed out those responsible. Unfortunately, a similar phenomenon at the other end of the spectrum of aging often goes unnoticed. The National Council on Aging (NCOA) draws attention to the fact that elders in America are often harmed through “physical abuse, emotional abuse, sexual abuse, exploitation, neglect, and abandonment.”

According to the NCOA, approximately 1 in 10 Americans aged 60+ have been abused in some fashion, and some sources estimate that up to 5 million elders are abused each year. Both men and women can be abusers, and the perpetrators are family members in almost 90% of cases. Social isolation and mental impairment often leave an elder susceptible to abuse, and studies as of late show that almost 50% of those with dementia have experienced abuse or neglect. Those in their later years who have been abused are at thrice the risk of death when compared to those who have not. In addition, elder financial abuse takes a toll on older Americans to the tune of 2.9 billion dollars per year, and this number is likely under reported.

If you see warning signs of elder abuse such as abrasions, atypical withdrawal from normal activities, sudden changes in finances, or unusual depression, call an attorney experienced in dealing with elder abuse claims. Our aging citizens deserve better.