Pedestrian Accidents and What You Need to Know 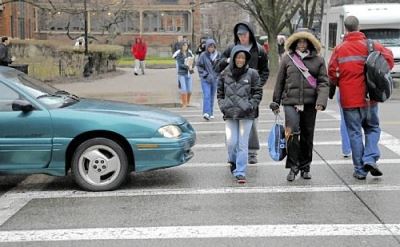 Being on the road is a dangerous place for most, but the group that is arguably the most vulnerable is also often the most forgotten – pedestrians. On an average trip, pedestrians are 1.5 times more likely than occupants of passenger vehicles to be killed in a car accident. Pedestrians were also one of the few groups of road users to experience an increase in fatalities in 2012, increasing to 4,743 from 4,457 the previous year. That number increased again in 2014, to 4,884. Fourteen percent of traffic fatalities and about 3 percent of injuries in traffic crashes involve pedestrians. On average, every two hours a pedestrian is killed and every 14 minutes a pedestrian is injured in various road accidents.

According to a national survey on pedestrian attitudes and behaviors, poor quality facilities are the leading cause of pedestrian injury. Getting hit by a car was only the third leading source of injury, following tripping and falling on either an uneven sidewalk or on one’s own. Nonetheless, actions can be taken to decrease injuries and fatalities.

The Centers for Disease Control and Prevention (CDC) pedestrian safety tips include the following:

Additionally, alcohol impairment contributed to 49% of crashes that led to pedestrian deaths – both drivers and pedestrians should take care to drink responsibly.

Both drivers and pedestrians have a duty to use care in their respective activities. Generally, the totality of the circumstances are taken into account in determining fault when the driver of a motor vehicle strikes a pedestrian. Drivers are held to a higher standard of care due to the fact that driving involves a car – an instrumentality capable of inflicting injury or death. However, a pedestrian could also be found to be negligent in an accident where they were jaywalking, crossing against the traffic signal, walking in areas where pedestrian access is prohibited and more. Those involved in an accident, whether as a motorist or pedestrian, should contact our office for a consultation.